This year’s Academy Award nominees for Excellence in Costume Design take us all over the spectrum, through fantasy, history and even somewhere in between. But who’s going to be taking home that little golden statue at the end of the night on Sunday? Well, the DD office has looked at the choices once again and is ready to take bets on the winner!

And the nominees are:

This one doesn’t stand a chance. How it even made it on this list is beyond us, when there are plenty of other serviceable 20th century period dramas that easily could have taken its place. (Take a look at the CDGA17 nominees for Period film and replace any of those in this spot.) A lot of press has been made lately about the demographics of the Academy Award voters: 94% white, 76% men, with an average age of 63. Well you can bet that all those 63 year old voters think the 1970s was the greatest decade in human history, and how! Because they made it so! Just look at that photo: Jesus was a hippy, ya dig! For the sake of being objective, I’ll actually discuss the costumes for a moment. Here’s a rundown of the plot: Hippy vs. The Fuzz meets drugged-up psychedelic pseudo-noir. Denim, brown suits, orange, dirt — what more can I say? The movie is a mere caricature: a caricature of its genre, a caricature of an era and a caricature of a good movie. Save yourself 148 minutes and take our word for it, odds do not favour this one. 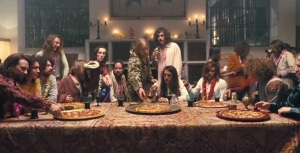 The last time director Mike Leigh made a Victorian biography, we got one of the Daily Dandizette’s favourite cinematograph’s, 1999’s delightful Topsy Turvy, and costume designer Lindy Hemming got an Oscar. The film is perhaps the best dramatization of artists at work by showing both sides of the creative temperament, from the Romantic ideal of the restless artist to the driven, hardworking professional. As you can well imagine, the costumes are rich in detail and varied in scope.

Mr. Turner is another paean to the creative process, and the costumes feel real, lived in, and not museum pieces. A lot of that comes from the naturalistic performances Leigh gets from his actors, particularly Timothy Spall as intense landscape artist, Turner. As much as we enjoyed Jacqueline Durran’s costumes, the nature of the film doesn’t allow the same breadth as Topsy Turvy, which had the requisite period clothes, but added the fanciful designs of the Gilbert and Sullivan stage shows and traditional Japanese clothing as well. Also, it’s the least known film in the category and that’s never a good thing.

The first of two Disney nods in the costume category, Maleficent was not a favorite movie for me, despite my love for Disney, and we fear our bias might cloud our assessment, but it’s still more of a long shot than not. Maleficent is a revisionist telling of Walt Disney’s classic 1958 “Sleeping Beauty” with one goal to capitalize on the most marketable Disney villain of all time, and Angelina Jolie’s unnaturally defined high cheekbones. Sheppard’s take on the costumes are more naturalistic and simultaneously more fantastical — and neither do much to improve the story, rather it feels like change for the sake of change. One of the things that makes “Sleeping Beauty” truly great are the concept designs by Eyvind Earle that shaped not only the entire production of the original movie, but also the most beloved icon of Disneyland — Sleeping Beauty’s castle. It is a style that combines history, modern art and whimsy seamlessly, and which “Maleficent” does much to ignore and bastardize. Now before we totally throw ourselves under the bus here, we really love Sheppard’s work in “Captain America: The First Avenger” and many of her other credits, but as previously mentioned, the production design of this movie is simply not to the DD’s taste.

Heaven help us, we at the DD have liked the past three Wes Anderson films. Where we once had contempt for his overly whimsical dioramas, The Fantastic Mr. Fox maintained the irreverence of Roald Dalh’s original novel while marrying to Anderson’s As with all things Wes Anderson, whimsy is the name of the game and Grand Budapest Hotel is no exception. Here the costumes both enforce the style of the production while simultaneously propelling the story forward through time and scenery in a very manufactured world. But also what more can we add, the look is very par for the course Wes Anderson and we even dare ask where does the line between designer and director end on this picture? Nevertheless, bravo for an exceptional use of colour.

Providing original costume design for a movie like “Into the Woods” is actually a lot more challenging than you’d think. It is story adapted from a Broadway show with its own unique design, but even more so, the characters are from beloved childhood stories that everyone knows already. This is a very narrow space to word within. Little Red Riding Hood must be wearing a red hood, because the audience must both recognize and accept this character before she has even been introduced. The costumes of Into the Woods are an interesting marriage of couture, nature and sex. Just look at Meryl Streep’s post-transformation gown to get a sense of our meaning. Add in the behind the scenes magic Atwood pulled off to keep Emily Blunt’s pregnancy under wraps, and we call this one best in show.

Usually we might look to the Costume Designers Guild Award winners for a hint, but unfortunately we’ve been left out to dry this year! Both our top contenders: The Grand Budapest Hotel and Into the Woods earned top awards for costume design in separate categories. Congrats to all the CDGA winners!

So it’s up to you reader to be the judge!

Let’s face it: the make-or -break items on everyone’s Oscar pool are always the technical categories, so if you really, really want to beat out Kevin from HR, read on as the Dandizette gives its odds on the nominees. And while Costume Design is easier to predict than, say, Sound Editing (poor Sound Editing, it always seems to be the category that people reference first when it come to obscure Oscar categories), the rule of thumb “Go for the one with the biggest dresses” doesn’t necessarily apply in a year with an interesting mix of nominees, each with their own unique styles. This is also a year without any fantasy nominees, as the Oscars usually break towards history. This year, it’s all history.

Let’s go to the nominees!

Keep in mind, this isn’t an assessment of the quality of the costumes–we all know more factors than quality go into Oscar voting–but an analysis that includes the other mitigating factors. All the nominated costume designers deserve to be nominated and deserve to win.

The Grandmaster is the Dandizette’s long shot for a number of reasons.

Hong Kong director Wong Kar-Wai has always been more concerned with the formal elements of film as opposed to, say, narrative coherence. Normally this wouldn’t have any bearing over the costume design, but it’s important in the case of The Grandmaster. There’s no doubt that the film is gorgeously visual in every sense, costumes included. The transition from traditional Chinese dress to incorporate western influences in the early 20th century is captured perfectly. The problem is the costumes are only a part of an overly impressionistic whole. This makes it hard to judge context and motivation for the costumes because the characters are themselves impressionistic and vaguely drawn.

The Grandmaster is also the lone foreign language film, and its setting in early- to mid-20th century China makes it lack context for some Academy voters who will marvel at the exoticism and aesthetic appeal of the costumes, but will have difficulty judging their authenticity. And even were they so included to do additional study, Chinese dress in general is notoriously difficult to research. There are precious few sources for those of us who cannot read Chinese, and they are extremely rare to find. 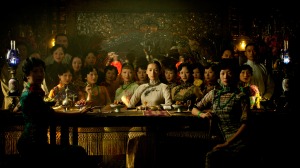 Ralph Fiennes’ Dickens drama The Invisible Woman would otherwise have “biggest dresses” going for it, but it is a bit of a surprise nominee, because it’s a small movie that’s only just opened to limited release in North America in January. Still, those Victorian dresses are indeed big, so it’s got that going for it. In any case, the audience simply isn’t wide enough to give it enough votes. It hasn’t opened yet at the Dandizette’s local cinema, but it’ll be a surprise winner in any case.

Here’s where the voting gets tough. David O. Russell’s American Hustle is a blockbuster and a crowd-pleaser, but the Best Costume Design award rarely goes to a film set in modern times, and the last time a film set in the seventies won the award was All That Jazz in the seventies. It’s a glittery, greasy, trashy decade, and Michael’s Wilkinson’s Dorito-stained designs convey that in every scene. More to the point, the costumes are highly motivated by the characters and the story, and the film strikes the right balance between historical authenticity and artful interpretation. All are important factors in great costume design. Still, the artfulness is perhaps a little too subtle and the aesthetic appeal of the costumes isn’t as boldly foregrounded as some of the other nominees (unless you’re a fan of Amy Adams’ cleavage, in which case it’s the clear winner.) 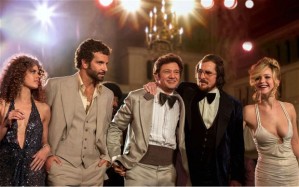 The Great Gatsby had the earliest release date of all the nominated films, and has had a few months to allow itself it be forgotten. Catherine Martin’s daring designs, however, are easily the most memorable part of the film.

Like all Baz Luhrman movies, The Great Gatsby is in love with its costumes. You can feel the joy and creative energy the filmmakers had in their approach to the costumes. If a film existed solely to show off its costumes, that film would be The Great Gatsby. Indeed, this is the closest nominee to a fantasy film, at times sacrificing historical authenticity for aesthetic appeal, sartorial excess and overall artsy fartsiness.

The thing that keeps the film from being the our front-runner is confusing authorship. It might be difficult for voters to give the nod to Catherine Martin when some of the costumes were designed by Miuccia Prada (Prada, Miu Miu) and Brooks Brothers. Not that this has been a problem for some of the great costume designers in the past. If you’ve read our post on Edith Head, you know that even the most Oscar-awarded costume designer of all time worked with the fashion houses of the day to give their characters the latest looks (See: Givenchy and Sabrina, 1954). If an existing look is what’s right for the characters, story and the overall design of the film, that’s the costume designer’s decision, too. 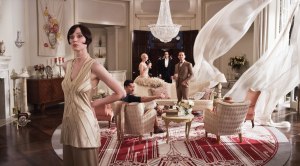 Steve McQueen’s inevitable Best Picture winner is the Daily Dandizette’s bet for the Best Costume Design statue in 2014. The film is a stunning, powerful, essential film we never, ever want to see again. In between the scenes of unspeakable human degradation and horror, there are a large volume of highly accomplished costumes. Indeed, the costumes are an essential to establishing the disparity of power between slave-owners and slaves. We’d otherwise marvel at the antebellum dresses Sarah Paulson’s character wears throughout the film, but their opulence becomes a stomach-churning counterpoint to the plight of the slaves–exactly as it should be. The film is a perfect example of how costume is used to tell the story.

Patricia Norris also won the Costume Designers Guild Award for Excellence in Period Film this past Saturday for 12 Years a Slave, so it definitely has the most momentum going into the Oscars. 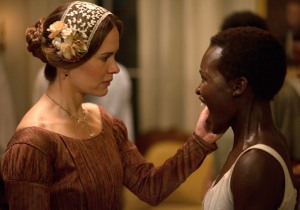 There you have it. The smart money’s on 12 Years a Slave, but the real winners are the fans of great costume design! Congratulations to all the nominees and good luck on Oscar night.